Soya chunks curry is a very tasty vegan and gluten-free Indian curry recipe made with soya chunks also called nutrela in India, and potatoes. A great meat substitute soya chunks are made with a by product of soyabean oil. They taste delicious and are healthy too.

One of my favorite Indian curries is soya chunks curry. It’s also called Aloo Soya or Aloo Nutrela. It’s very popular in the Indian subcontinent however, a lot of people from the other regions are not aware of it.

I was introduced to a similar product by my Chinese friends which they call Malaysian tofu.

Though I don’t crave meat anymore in my initial days of turning a vegetarian, soya chunks curry helped me a lot in dealing with the meat cravings. It’s still my favorite substitute for meat.

What are Soya chunks or Nutrela made of?

Soya chunks are made using a by-product of the Soya bean oil i.e. the fibrous soya bean part which is left behind while extracting oil from soya bean.

Other soya products used in India as a meat replacement.

In India, a lot of different Soya products are used as a meat replacement. The most common are Soya chunks.

If you want to create a meat-free version of a dish that uses minced meat, you can use Soya granules. They are similar to soya chunks in taste and texture but are in granular form.

In many Indian cities like Delhi and Noida, you will find some restaurants or street vendors selling the vegan or vegetarian versions of all the popular non-vegetarian dishes. They use another soya product called chaap to make it. If nobody tells you that it’s vegan or vegetarian, you will never be able to guess that you are not eating meat.

How to use Soya chunks in a dish?

If the recipe asks to fry the minced meat with onions, fry the soaked or boiled soya granules with onions.

In which recipes can soya chunks be used?

You can use soya chunks to make curries, stir-fries or create a vegan/ vegetarian version of any non-vegetarian recipe in which meat chunks are used.

Add a handful of soaked nutrela with vegetables in your pulao or veg biryani. It will make the dish tastier and healthier.

Where to buy Soya Chunks or granules from?

You can easily find them in any Indian store and online too. Just make sure to buy a good quality product.

What to serve with Aloo Soya Chunks curry?

Generally, it’s eaten with Indian bread like Roti or Paratha. If you want, you can also enjoy it with rice.

Finding tasty protein-rich recipe ideas is one of the biggest challenges faced by Vegans and vegetarians. If you also want to add a variety to your meat-free protein-rich dishes, don’t miss to check the following recipes:

For me there is nothing more comforting than a bowl of curry with some rice or roti. If you like curries too and looking for vegan ideas then you will definitely like the following recipes: 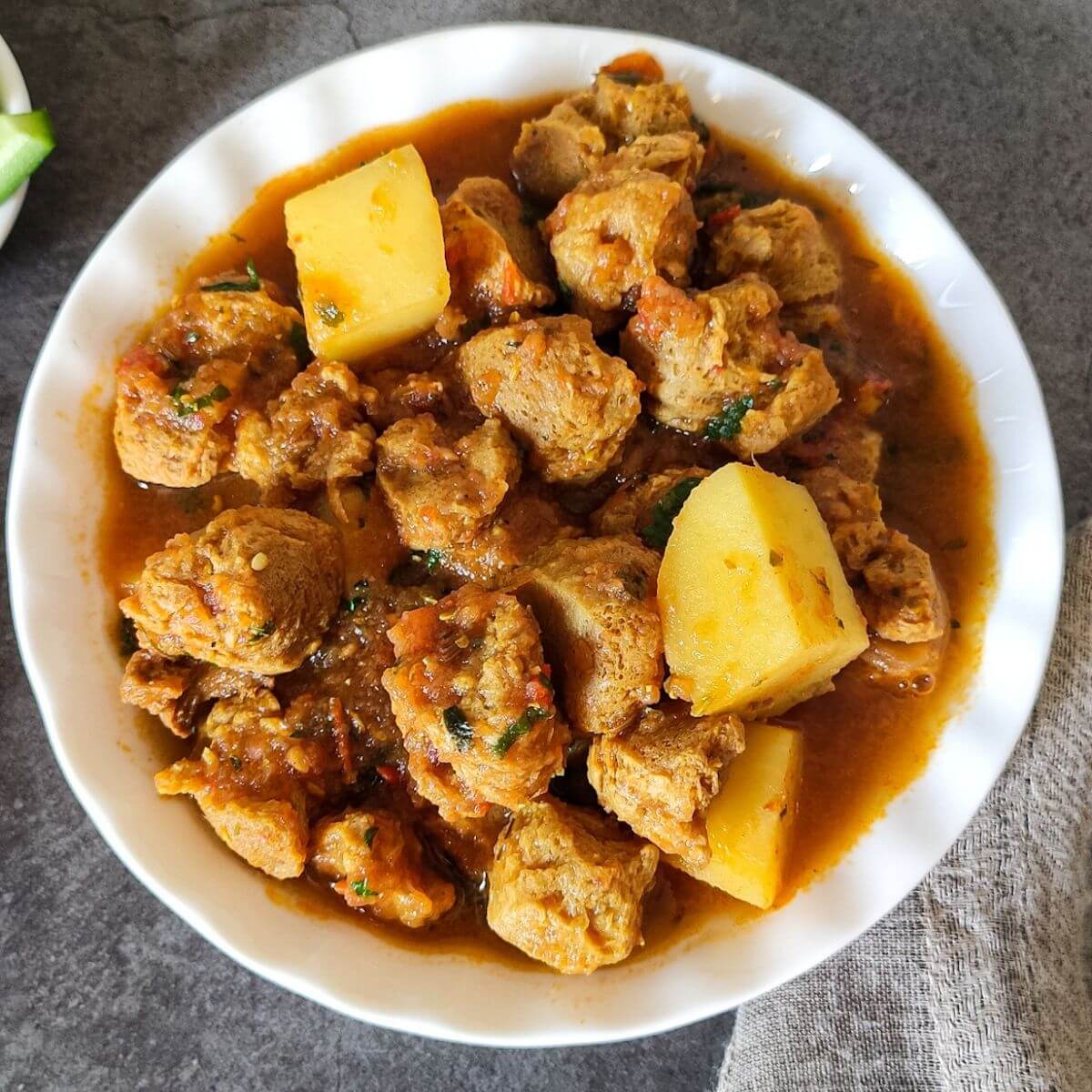 How to make Soya Chunks Curry?